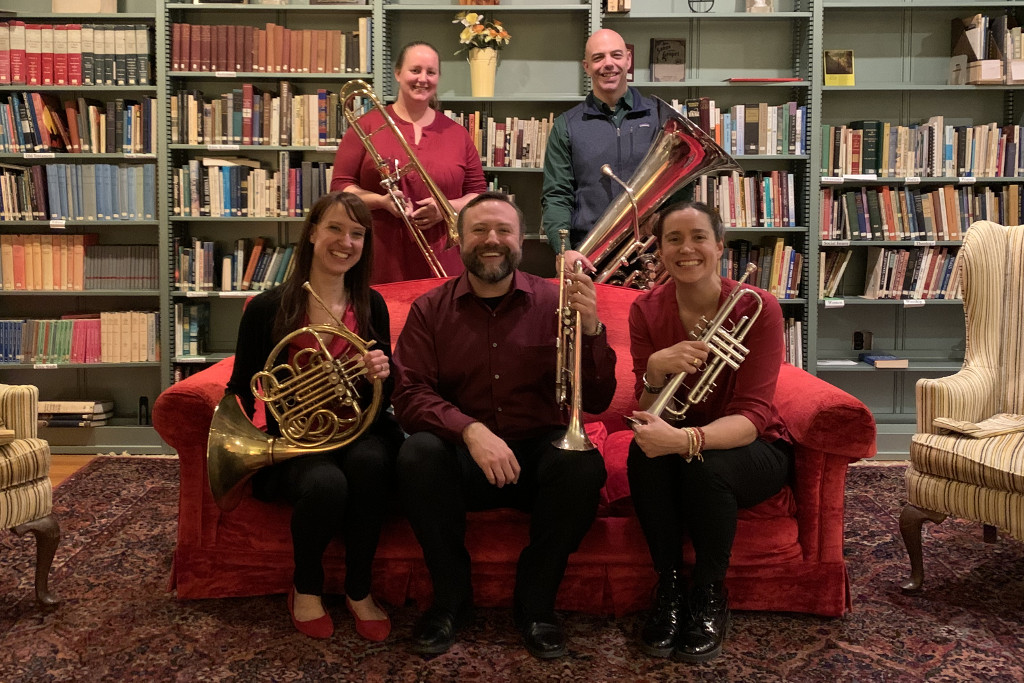 Brass is a quintet of professional musicians brought together by a love of virtuoso playing and the camaraderie generated by live performance. Since its beginning, Brass has brought its particular brand of creative and innovative programming to Yale and the greater New Haven area. Originally born out of love of the wide variety of performance capabilities of brass instruments, the group has always been characterized by a playful levity that dances around the serious virtuosity of their performances.

From its inaugural concert on December 10, 1999, modestly titled "Brass: Five Guys in Concert," the ensemble has demonstrated a commitment to crafting performances that take audiences on a journey through the myriad tonal colors and moods possible on brass instruments. Each of Brass' over 50 concerts has explored this vast range in its own way. It has become part of their passion in programming to utilize these different colors to tell a story through the narrative of a single performance.

Brass has since its early days been associated with Yale’s Beinecke Rare Book and Manuscript Library, a partnership which has produced the Marble and Brass concert series, now in its 18th year. These popular concerts draw capacity crowds to hear varied and creative musical programs ranging from operatic to Dixieland, from harp concertos to music of the small and big screen. Every Brass season turns around the two concerts of the Marble and Brass series each year, which are the focus of much of the ensemble's creative efforts.

In its 18 year history, Brass has performed in Spain, Estonia, and Bermuda. They have appeared as featured performers at numerous Yale events and functions, and have collaborated with the legendary local band Mighty Purple. They have performed at Foxwoods and on the Learning Channel’s show Four Weddings. They collaborated with Darius, Danny, and Chris Brubeck to perform the world premier of the brass quintet arrangement of Dave Brubeck’s choral mass To Hope! A Celebration, under the direction of Brubeck’s long time musical collaborator, Russell Gloyd. Brass has recently released its 3rd CD, Sounds of the Season, on its record label, Unplayable Records.

Brass firmly believes that performance is about more than excellent execution of the music: the personalities and interactions between the performers and the creative space into which they invite the audience as active participants is vital to a truly memorable performance. Commitment to the highest performance standards coupled with an audience-centered experience is underscored in their motto: "Serious Music, Serious Fun."

Photo by Marilyn Catasus In the Spring of 1999, while still an undergraduate at Yale University, Drew Mazurek became a founding member of Brass. Drew performed with Brass for 7 seasons, then left the group in 2006 to pursue graduate work in Electrical Engineering. In 2008, Drew returned to Brass as a full time member. Drew's personality and musicality are an integral part of the sound of Brass.

A native of North Haven, Drew has studied with Richard Green and Ken Tedeschi. He has performed extensively with groups at Yale and Stanford, including the Yale Concert Band, the Yale Precision Marching Band, and the Stanford Wind Ensemble. In addition, he has performed with the Connecticut Choral Society, the Wallingford Symphony Orchestra, and Orchestra New England. Drew has performed in 9 countries spanning 4 continents. He holds degrees from Yale (BS) and Stanford (MS).

When he's not playing trumpet, Drew is either flying airplanes, playing softball, or working at his New Haven-based startup, Veoci.

Photo by Marilyn Catasus Olivia Malin first joined Brass in 2007 as a recent graduate of the Yale School of Music. Her career began as a liaison between Yale School of Music and the New Haven Public schools under YSM's Music In The Schools Initiative, and she moved on to become a full-time band director for one of the district's middle schools.

After 7 years teaching in New Haven, she relocated to the Bronx to continue teaching at the high school level. In the time that she has been at her new school, she has rebuilt the music program, increasing instrumental enrollment from 10 band students to over 100 students currently active in guitar, piano, percussion, rock band, chorus, and concert band.

Besides being a dedicated public school teacher, Olivia remains an active performer in the area playing with her new salsa band NYC Salsa Jamm, the Nigerian Highlife band, and assorted other shows. Olivia holds degrees in trumpet performance from Illinois Wesleyan University (BM), North Carolina School of the Arts (MM), and Yale School of Music (MM).

Olivia is excited to be rejoining Brass for their 2019 season.

Photo by Mateusz Zechowski Emily Boyer, a member of Brass since 2019, strives for opportunities to cultivate relationships through music. She co-founded the horn and harp duo Apple Orange Pair in 2010 to grow the contemporary repertoire and connect audiences with this unexpected pairing.

As an orchestral musician, Emily has performed with New Haven, Greater Bridgeport, Eastern Connecticut, and Waterbury Symphony Orchestras. Emily is an instructor at Naugatuck Valley and Middlesex Community Colleges and Educational Center for the Arts (New Haven, CT), maintains private brass studios at The Foote School and Hopkins School (New Haven), and is an Arts Provider with Hartford Performs. Emily currently serves as Co-Director of Music at Christ Presbyterian Church (PCA) in New Haven. She is a graduate of Peabody Conservatory (BM) and Yale School of Music (MM).

Photo by Marilyn Catasus Jennifer Griggs is an active freelance trombonist living in New York City. She performs in different musical settings with a variety of ensembles. Besides Brass, she is a member of Tromboteam! (whose debut album, featuring nine newly commissioned works, is scheduled for release in January 2014), Le Train Bleu, and the Patriot Brass Ensemble. Her work with the new music ensemble “Le Train Bleu” has led to performances at venues in New York such as Symphony Space, Le Poisson Rouge, Galapagos Art Space, Lar Lubovitch Dance Co, and DROM.

In addition, Jennifer has performed with the Waterbury Symphony, Wallingford Symphony, Orchestra New England, and Orchestra Modern. Before coming to the northeast, she was employed in the pit orchestra at the Cumberland County Playhouse in Tennessee. As an educator, Jennifer has served on the faculty at Naugatuck Valley Community College, Morse Summer Music Academy, and remains active in the Yale Music in Schools education outreach program. She has appeared as a guest artist and clinician at Southern Mississippi State University, University of Louisiana at Monroe, University of Ohio, University of Nebraska at Kearny, and many public schools. In 2010, as a member of the Yale Trombone Quartet, she traveled to Bogota, Colombia, where she was featured artist and clinician at the “100 Anos, 100 Trombones” festival.

Jennifer holds a degree in music education from Tennessee Technological University (BA) and a degree in trombone performance from the Yale School of Music (MM). Her teachers include Scott Hartman, Susan K. Smith, Joshua Hauser, and Kevin Chiarizzio.

Outside of her musical life, Jennifer is an avid horsewoman and is currently an instructor at Essex Equestrian Center in New Jersey, where she teaches riding, showing, and horsemanship to students of all ages.

Photo by Marilyn Catasus Jason Arnold hails from Midland, Texas. A member of Brass since 2009, he is also on the Faculty of the New York Summer Music Festival, where he recently performed with Jason Ham of the West Point Band.

He has performed with many orchestras in Connectucut, including the Bridgeport Symphony, the Waterbury Symphony, and the Hartford Symphony. He can be heard on the recording Bone-fide (Summit Records) with Joseph Alessi and the Imperial Brass Band. A versatile performer, Jason has performed in a wide variety of venues, ranging from Carnegie Hall to ABC's All My Children. He holds degrees from West Texas A&M University (BM) and the Manhattan School of Music (MM).

Jason's hobbies include watching football and baseball, and a new interest in woodworking.

Photo by Marilyn Catasus Junius Johnson co-founded Brass in 1999. A native of Louisville, Kentucky and an avid performer, he is experienced in horn performance across nearly every major genre. He brings his extensive training in the humanities to the construction of Brass' innovative programming.

At Yale, Junius has performed with every major ensemble on campus, and has been a featured soloist twice each with the Yale Bach Society and the Saybrook College Orchestra. He appears on several CDs of local folk/rock band Mighty Purple (HMG Records), and on the soundtrack to the Hollywood feature film The Brothers Bloom (Rian Johnson, director). Junius is the former Executive Director of Orchestra New England, an emeritus member of the Archipelago Project and an honorary member of the Bermuda Regiment Band and the US Army Field Band. He has performed around the world on numerous international tours, and holds degrees from Oral Roberts University (BA) and Yale University (PhD).

Junius is currently Assistant Professor of Historical Theology in the Honors Program at Baylor University. He continues to be involved with Brass through concert planning, and returns to New Haven to perform as often as he can.