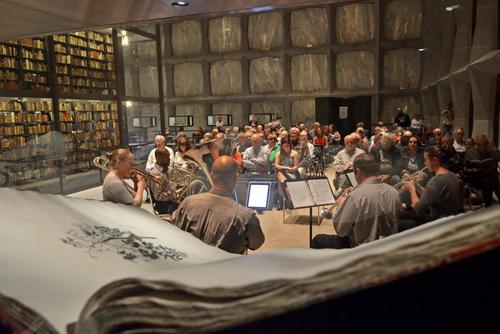 The Beinecke Library and Brass have an ongoing collaboration that is known as the Marble and Brass series. This series is the longest continually running series in the Beinecke’s robust lineup of musical offerings. The idea is simple: the rich architectural beauty of the Beinecke Library has, as a side effect, created a premier space for musical performance that is especially well-suited to the rich, resonant timbre of brass instruments. The Beinecke mezzanine receives the depth of sound that brass instruments produce and creates a 360 degree immersion into the tonal space.

Brass first revived the previously dormant concert series in the Spring of 2000. Since then Marble and Brass has continually increased in popularity. Now the series thrills over 300 people at the annual holiday concert, packing every corner of the Beinecke mezzanine.

The concerts of the Marble and Brass series have varied widely in their theme and musical genre. Brass strives to continue to bring innovative and engaging musical programs to the series each year. Below is a list of the concerts in the series. Click on a concert to view the program for that concert.